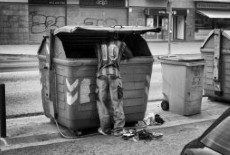 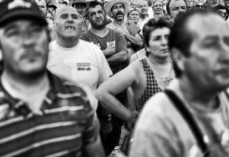 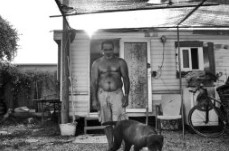 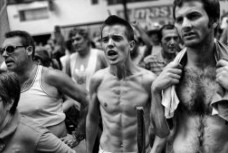 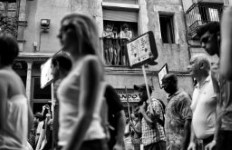 MADRID — On a recent evening, a hip-looking young woman was sorting through a stack of crates outside a fruit and vegetable store here in the working-class neighborhood of Vallecas as it shut down for the night.


At first glance, she looked as if she might be a store employee. But no. The young woman was looking through the day’s trash for her next meal. Already, she had found a dozen aging potatoes she deemed edible and loaded them onto a luggage cart parked nearby.

“When you don’t have enough money,” she said, declining to give her name, “this is what there is.”

The woman, 33, said that she had once worked at the post office but that her unemployment benefits had run out and she was living now on 400 euros a month, about $520. She was squatting with some friends in a building that still had water and electricity, while collecting “a little of everything” from the garbage after stores closed and the streets were dark and quiet.

Such survival tactics are becoming increasingly commonplace here, with an unemployment rate over 50 percent among young people and more and more households having adults without jobs. So pervasive is the problem of scavenging that one Spanish city has resorted to installing locks on supermarket trash bins as a public health precaution.

As Spain tries desperately to meet its budget targets, it has been forced to embark on the same path as Greece, introducing one austerity measure after another, cutting jobs, salaries, pensions and benefits, even as the economy continues to shrink.

Most recently, the government raised the value-added tax three percentage points, to 21 percent, on most goods, and two percentage points on many food items, making life just that much harder for those on the edge. Little relief is in sight as the country’s regional governments, facing their own budget crisis, are chipping away at a range of previously free services, including school lunches for low-income families.

For a growing number, the food in garbage bins helps make ends meet.

At the huge wholesale fruit and vegetable market on the outskirts of this city recently, workers bustled, loading crates onto trucks. But in virtually every bay, there were men and women furtively collecting items that had rolled into the gutter.

“It’s against the dignity of these people to have to look for food in this manner,” said Eduardo Berloso, an official in Girona, the city that padlocked its supermarket trash bins.

Mr. Berloso proposed the measure last month after hearing from social workers and seeing for himself one evening “the humiliating gesture of a mother with children looking around before digging into the bins.”

The Caritas report also found that 22 percent of Spanish households were living in poverty and that about 600,000 had no income whatsoever. All these numbers are expected to continue to get worse in the coming months.

About a third of those seeking help, the Caritas report said, had never used a food pantry or a soup kitchen before the economic crisis hit. For many of them, the need to ask for help is deeply embarrassing. In some cases, families go to food pantries in neighboring towns so their friends and acquaintances will not see them.

In Madrid recently, as a supermarket prepared to close for the day in the Entrevias district of Vallecas, a small crowd gathered, ready to pounce on the garbage bins that would shortly be brought to the curb. Most reacted angrily to the presence of journalists. In the end, few managed to get anything as the trucks whisked the garbage away within minutes.

But in the morning at the bus stop in the wholesale market, men and women of all ages waited, loaded down with the morning’s collection. Some insisted that they had bought the groceries, though food is not generally for sale to individuals there.

Others admitted to foraging through the trash. Victor Victorio, 67, an immigrant from Peru, said he came here regularly to find fruits and vegetables tossed in the garbage. Mr. Victorio, who lost his job in construction in 2008, said he lived with his daughter and contributed whatever he found — on this day, peppers, tomatoes and carrots — to the household. “This is my pension,” he said.

For the wholesalers who have businesses here, the sight of people going through the scraps is hard.

“It is not nice to see what is happening to these people,” said Manu Gallego, the manager of Canniad Fruit. “It shouldn’t be like this.”

In Girona, Mr. Berloso said his aim in locking down the bins was to keep people healthy and push them to get food at licensed pantries and soup kitchens. As the locks are installed on the bins, the town is posting civilian agents nearby with vouchers instructing people to register for social services and food aid.

He said 80 to 100 people had been regularly sorting through the bins before he took action, with a strong likelihood that many more were relying on thrown-away food to get by.

But Mr. Berloso’s locks created something of an uproar across Spain, where the economic crisis is fueling more and more protests highlighting hunger. A group of mayors and unionists in southern Spain, where unemployment rates are far above the average, recently staged Robin Hood raids on two supermarkets, loading carts with basic foods and pressing them to donate more food to the needy.

More than a dozen people are facing prosecution for theft over the stunt. But they are unrepentant and appear to have huge local support. “Taking some food and giving it to families who are having a really hard time, if this is stealing, I am guilty,” one of the men, Francisco Molero of the farmworkers’ SAT union, told the local news media afterward.

Some politicians say Girona’s locks are really all about protecting Girona’s image. Dominated by medieval buildings and the picturesque cobblestone streets of a beautifully preserved former Jewish quarter, the city of about 100,000 derives most of its income from tourism.

“The social workers or civil agents could refer people to the food distribution center without having to lock bins,” said Pia Bosch, a Socialist councilor in Girona. “It’s like killing a fly with a cannonball.”

The unemployment rate is still relatively low in Girona — 14 percent over all, compared with 25 percent for the country as a whole. But more and more families have no income. Of the 7,700 unemployed in Girona, Mr. Berloso said, 40 percent have now run out of benefits.

Many, he said, were “people who never expected to find themselves in this position.”

Ramon Barnera, who runs the Caritas programs in Girona, said the organization realized early on that shame was a factor preventing people from coming forward to ask for food. So three years ago, it helped create food distribution sites that looked more like supermarkets, and removed the charity’s name from the outside of the building.

“We looked for a system that would give dignity,” Mr. Barnera said. “This is not easy for people.”

On a recent morning, Juan Javier, 29, who had come to collect milk, pasta, vegetables and eggs from one of the distribution centers, was one of the few clients who would discuss his circumstances. A former printer, he has been out of work for two years. “I would like to have a job,” he said, “and not be here.”

In a nearby soup kitchen, Toni López, 36, waited quietly for a free lunch with his girlfriend, Monica Vargas, 46, a beautician. The couple recently became homeless when they fell two months behind on their rent. “All our lives we have been working people,” Mr. Lopez said. “We are only here because we are decent people. The landlord was knocking on the door demanding the rent, so we said, ‘Here, here are the keys.’ ”

Mr. Lopez, who gets occasional work these days in restaurant kitchens, said he had a sister but had not gone to her for help. “I can’t bear to tell her,” he said. “I have always pulled through. I’ve always managed to get by. This is new.”
Publicado por Jose Vázquez